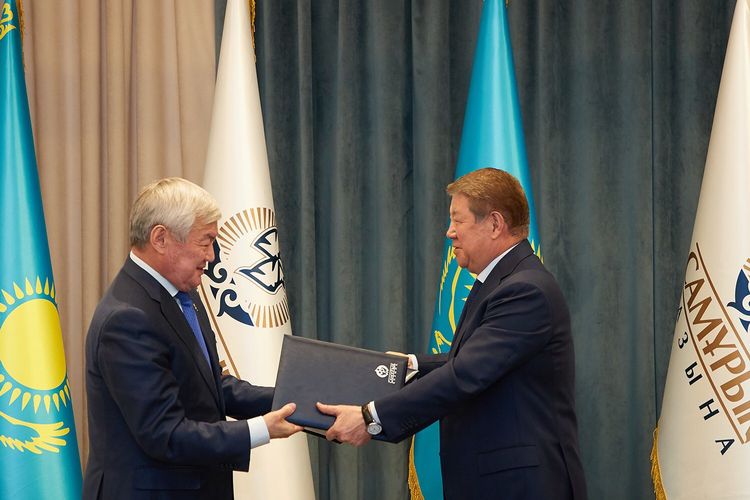 Within the framework of the Memorandum, cooperation will be carried out to create favorable conditions for children from low-income and large families, from families in difficult life situations, senior citizens, disabled people, veterans, minors and young people.

Along with this, the development of kids’ yard clubs for the promotion of health and development of creative abilities of at least 1,500 children will be continued, sightseeing tours across Kazakhstan were organized for 600 children from remote villages and stations, social assistance and free railway travel were provided  across Kazakhstan and the countries of the Commonwealth of Independent States for at least 1,400 veterans of the Great Patriotic War and workers of the rear, at least 40 universal sports and children's playgrounds were installed.

At the same time, it is planned to provide at least 30 travel grants for the participation of children and adolescents under the age of 18 years in intellectual, creative and sports competitions. It is planned to attract, select and develop at least 30 talented university graduates who are able to solve various sectoral tasks.

In addition, work on the attraction and selection of candidates for internships in digitalization projects of the industrial sector, aimed at developing the practical experience of at least 60 graduates with subsequent employment will be continued.

The Memorandum also provides the development of social entrepreneurship by providing financial and non-financial support to initiatives of at least 50 non-profit organizations and support for organizations of disabled people-producers of the country through the procurement of goods under the approved Rules.

“The signing takes place within the framework of the Leader of the Nation-First President’s program“The Society of Welfare: 10 Goals of the Decade ”aimed at supporting and developing proactive social policies. The Memorandum will allow us to combine our efforts in order to further effectively develop the social sphere, increase the level and quality of life of certain categories of citizens, and implement social initiatives,” said Ahmetzhan Yesimov, CEO of “Samruk-Kazyna” JSC.

In turn, Berdibek Saparbayev noted that cooperative activities in this direction will open new opportunities for the effective solution of social problems.

“The problems of socially vulnerable segments of the population, in particular, the provision of housing for large and low-income families, orphan children, today remain one of the most important problems of society, that require coeperative actions of the state and business,” the Labor and Social Protection Minister concluded.

The single operator of the charitable activities of the group of companies of SWF is “Samruk-Kazyna Trust” Social Project Development Fund. Recall, since the beginning of 2019, the Fund has been implementing 15 social projects from the entire group of companies of the SWF, aimed at solving socially important issues for the population, totaling 4.8 billion tenge. Free rehabilitation courses were organized for 1170 children diagnosed with cerebral palsy. More than 9,000 school-age children attend educational and sports clubs for free and take part in sports competitions.